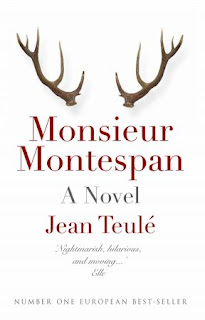 The Sun King, Louis XIV of France, was a man that was used to getting what he wanted, and he wanted the most beautiful, buxom blonde in the land, Athénaïs. Never mind that Athénaïs was very much wanted by her own husband, Louis-Henri. Poor Louis-Henri, he was desperately in love and doomed for failure (It’s not easy going up against a man called, ‘The Sun King’ you know).

Gallic books has published Monsieur Montespan (the story of poor Louis-Henri, his wife Athénaïs, and her sugar daddy, Louis XIV) and have sent me a copy so that I may read it and tell you what I think. Well I think it’s a fantasticly bawdy, naughty, romp of historical fiction (if you like that sort of thing, and I do).  In the words of Gallic Books:

The Marquis de Montespan and his new wife, Athénaïs, are a true love-match- a rarity amongst the nobility of seventeenth-century France. But love is not enough to maintain their hedonistic lifestyle, and the couple soon face huge debts. When Madame de Montespan is offered the chance to become lady-in-waiting to the Queen at Versailles, she seizes this opportunity to turn their fortunes round. Too late, Montespan discovers that his ravishing wife has caught the eye of King Louis XIV. As everyone congratulates him on his new status of cuckold by royal appointment, the Marquis is broken-hearted. He vows to wreak revenge on the monarch and win back his adored Marquise.

The author, Jean Teulé has captured the essence of the period brilliantly in this historical novel full of all the things I like best about the genre; real figures, real events, eloquent pose, and descriptive imagery, all with a dash of 17th century naughtiness. And since I would like you too to have a chance to spend evenings curled up with a glass of wine and a bawdy, naughty, romp, I’m giving away three copies of Monsieur Montespan for your reading pleasure.

And I’m giving you three opportunities to win one of the three copies: 1st entry: What’s your favorite book genre? Leave a comment telling me. 2nd entry: Be a follower and let me know by leaving a comment. 3rd entry: Like me on Facebook and leave a comment to let me know that you like me (I want you to like me).

(oh and contest closes Saturday 5th March,
and winner will be picked on Sunday)

48 responses to “a naughty bawdy giveaway”