My fellow expat (very soon to be in her case), and fellow Texan, Sarah at Texpatsabroad awarded me the Stylish Blogger Award. I love these things. They’re my flair. A big ol’ Texas sized thank you to you Sarah.

1. The population of Le Petit Village is about 260 but can swell to up to 1000 during the tourist months. Imagine what that’s like for us? For example; that would be like if you lived in Manhattan and one day you woke up and there were 6.4 million people instead of 1.6 million. Crazy right?

2. We are perched at an altitude of 910 meters (2985 feet). You can see the Italian Alps from Le Petit Village (you really can). One day Fifty and I might walk all the way there (but I doubt it).

3. There is one standing house of worship in Le Petit Village (it’s Catholic). There are also ruins of a medieval chapel in the old village: 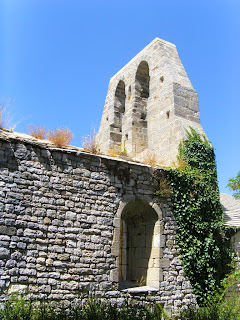 But within the outer village, La Petite Notre Dame still stands. It originally dates to Roman times. It’s that old. 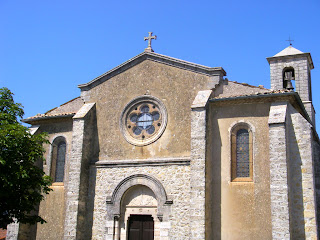 3. And since Le Petit Village is super old you would think that all the buildings would look decrepit and crumbling wouldn’t you? But they aren’t and you want to know why? Because Le Petit Village happens to have an expert artisanal Mason on call that’s why (not Freemason, plain old Mason). And do you want to know who that Mason is? (of course you do) It’s Brother-in-Law. He restores the facades of old homes, making them look almost exactly like they did when originally constructed, but shiny and new again. So if you happen to need an old home in the south of France restored, give me a shout and I’ll hook you up.

4. There is one épicerie (small grocery store. very small) in the village but it is only open from 8am – 12:30pm. Except for Wednesdays. It’s closed on Wednesdays. How convenient is that?

5. And speaking of l’épicerie, it’s currently owned by Child Bride’s grandmother. Before that Mrs Honey owned it, and before that Papa’s Wife owned it. See what a small, teeny tiny little place we are?

6. There used to be a Pizzeria in Le Petit Village. This is not to be confused with the Tuesday night Pizza Van but an actual Pizzeria. And guess who owned it…. Papa! (and even if he is retired from the pizza business, you’d think that he could still whip me up a pie every once in awhile).

Kirsty @ You Had Me At Bonjour… I can’t wait to hear what my craft Aussie friend’s fun facts  are (She’s a little nutty. And crafty).

{av} at {long distance loving}… I know a little bit about long distance relationships and so does {av}, it’s a bonding thing.