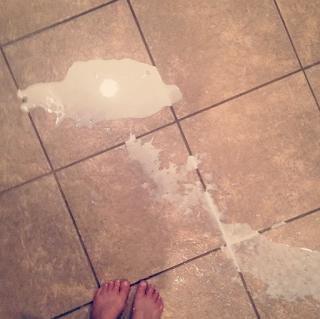 Don’t cry over spilled milk. That’s what they say. Little did I know that about an hour after I took this photo, I’d be crying over so much more…

(I wasn’t sure if I could put it all out there or if I even should. But then I thought, you know what, I’m gonna do it. Maybe it’ll be cathartic. Or maybe it would be a huge mistake that I will regret for all eternity. Who knows? Not me. But I know one thing, could’ve, would’ve, should’ve, so I’m doing it.)

It was a Monday morning in November 2016. I was still staying at my mother’s house in Texas, and my husband was living and working in Dublin while we waited for his green card to come through.

After waking up, I did my usual, I texted good morning to my long-distance spouse, poured myself a cup of coffee (spilling a bunch of milk in the process), and settled into my morning routine of checking email and social media sites.

On Linkedin, I saw that my husband had commented on a post, and in that comment, he had tagged someone. It was a woman with a name that I didn’t recognize. “Probably a work colleague,” I thought.

I let curiosity get the best of me and popped over to Facebook to search for her. I was curious if they were connected on there too or if we had any friends in common.

After typing her first name and then finishing her last, a bunch of accounts appeared. As I scrolled down the list, one, in particular, jumped out at me. I knew it was her immediately because there she was. A big bright selfie smile in her profile picture… alongside a smiling photo of my husband.

There he was. My husband was in another woman’s Facebook profile picture.

P.S. I’m still trying to figure out how to tell the tale of the past six years or so of my life. It’ll be a jimble jumble jumping around mess, I’m sure, but I need to tell it. I need to get it out. Bear with me.